From the 16th-23rd of May 2015 I exhibited the Edible Map of Newcastle, alongside limited edition plates, and a series of seven-day artist led walks, as part of the Urban Organism show at the Newbridge project, NewBridge Street, Newcastle. Over the week, over 100 people took part in 15 walks across the city centre (see images), using the edible map as a guide to how the various empty spaces of the city might look if food growing was an everyday occurrence.

If you would like a copy of the map, please contact me at mikeytomkins at gmail dot com.

The map contains the following text …

Using this map of 28 ha* of central Newcastle, you can begin to explore the potential for Urban Agriculture in central Newcastle, in terms of both physical location and yield and practice. In drawing this map, I have spent time in the city, walking its streets and concrete spaces, looking over rooftops, and sitting in its green, grassy areas. The map therefore combines art and research together, intertwining analysis within a context of an artistic work.

However, the artwork is not so much the drawn map, but the participatory action of residents walking with the map. The Edible Map is a start, not a finish; it is a provocation and an invitation to take part as a walker in the city and imagine a very different landscape. It is a guide to the invisible, to the yet-to-be built and imagined; a guide for the amateur architect, and everyday resident, to have their city and eat it. It is an invitation to become a food-flâneur – use your imagination and become a ‘dweller landscaper’ (1), tactically augmenting your existing city, adding a bricolage of ideas and practices based around everyday actions, not planned or accounted for by professional designers.

The necessity for the vision of an edible city comes from the idea that cities can, and should, grow part of the food they consume, in order to reduce their dependence on imported food, creating urban spaces that are more resilient and autonomous.

This map sets out a provocation for Newcastle, demonstrating that food-growing will increasingly need to be taken seriously as a part of city infrastructure. More importantly, it shows that this is completely possible – and increasingly desirable. Our future cities will not be the same as the ones we have today, yet one thing is constant: we will need to eat, and there is no practical reason why part of this food couldn’t be produced locally right here in the heart of the city. 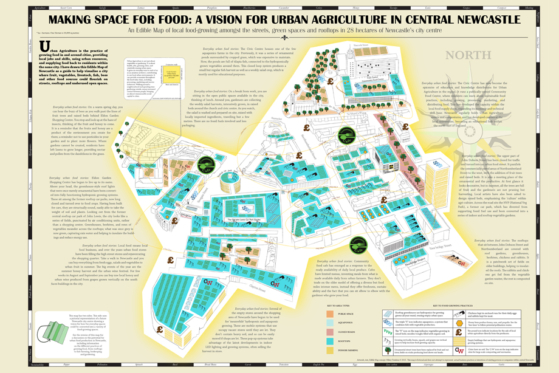