My name is Dr Mikey Tomkins. I work across academic research and art practices within the field of urban agriculture (UA) both as theory and practice.

The term UA describes the practice of growing food (vegetables, fruit, livestock and other products) within cities or dense human settlements, often produced intensively, to be consumed by within the same location.

In terms of UA practice, I am a beekeeper, having started learning in London in 2000. As an urban beekeeper, it doesn’t get more exciting than keeping bees on the roof of the Royal Festival Hall, Southbank, London in 2010 (see image below with Barnaby Shaw – image ©Eric Tourneret). During the last few years I have also begun to develop an interest in aquaponics and hydroponics, both at home in the UK and in the context of refugees in Iraq and Syria.

Today, I live in rural Sussex in a co-housing project, and attempt vegetable growing in a poly tunnel, keep bees and learn hydroponics. 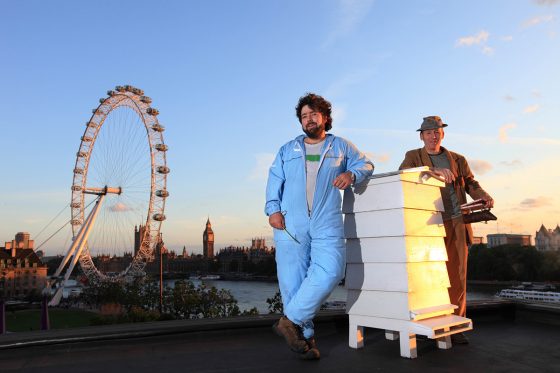 Beekeeping on the roof of the Royal Festival Hive, London with Barnaby Shaw.

I have worked across a broad range of practices, and situations. For example, I worked at Sustain as part of the Capital Growth project where I  trained beekeepers in London. From 2014, I worked in Dallas, developing UA as part of Citizen D, and from 2015-2018 I worked in Iraq developing UA in refugee camps in northern Iraq as co-founder of Lemon Tree Trust.

Lately, I have been focusing on the Edible Maps, a project I began in 2010, which combines mapping, artist led walks, talking, costumes and implementation. These diverse approaches can enrich and complement quantitative approaches to mapping UA where the more productive or earnest questions of yields are brought to life through stories, enactments, and images. These creative approaches help transform the dead map, that could be seen to represent a necropolis, into a lived and enacted map representing everyday hopes, dreams and stories of  urban residents.

Implementation is an important aspect of the work, meaning that something tangible should emerge from the process. For example, in Newcastle (2018-2020), with the support of local gallery Shieldfield Art Works, wheat was planted in seven locations around the neighbourhood which was harvest, milled and baked as bread. Implementation also happened in Dallas with the establishment of four gardens and a small urban farm, and in Iraqi refugee camps under the name of the Lemon tree Trust.

Academically, I studied fine art, before completing a Masters in architecture at UEL. Following on from this I completed my PhD at the University of Brighton in the school of architecture and design, and currently, I am an honorary research fellow there as well as working independently under the title Edible Urban.

Please contact me at mikeytomkins at gmail dot com for any questions.