The Fish Spirit Catcher, is one of two costumes and masks I have been making over 2020. The second is the Urban Wheat Guardian, which forms part of the event that celebrations the 2020 wheat harvest in Shieldfield. The costume is a walking embodiment of the nexus of food and urbanity literally written on its body. We can set the spirit free to wander the streets as the companion and guardian for urban food-gardeners and their hope for urban fertility and harvest.

These costumes form part of a nascent idea, formed from the approach that if cities in the near future are to become more productive then what kind of rituals and customs will emerge as part of the cultural aspect of local food production.

In this instance, I imagine the Fish Spirit Catcher will wonder the street of a city using its net to catch the spirits of fish that are being produced I’m the surround neighbourhoods. The clip board, held in on hand is used to signify that quantification is important, but it must me balance with the net that catches the spirits of the fish and thanks them for providing us with food.

The costume therefore forms an accompaniment too the near future vision of the edible map and walks. In the illustration below, its body is covered in salad leaves and it is wrapped in a pink scarf of glowing LED grow lights. 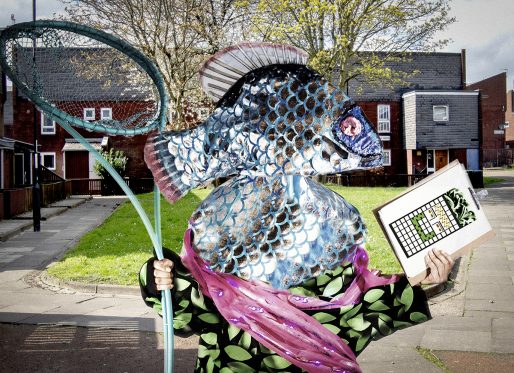